Well hello to me and some other people that may chance upon this little blog-ette. I, Thomas Walsh, do hereby solemnly swear to maybe, if I remember, or if I have the time and my computer doesn't explode, to post up stories, pictures and exclusive 'Olympian' style sounds for your delectation about the forthcoming 'Pugwash' album....."THE OLYMPUS SOUND". Me putting down rhythm guitar on the track 'Heal me' inspired by my personal letter from Jeff Lynne that I recieved during the recording of "The Olympus Sound". I still pee a little when I look at it and hold it and sleep with it and go shopping with it and.....

As well as giving you an insight into all things new in the Pug-camp I'll post up old treasures, lost Pug-tunes and stories relating to said ditties. This is just the start of my blog-life. So pop by and put another (B)log on the fire and if you're Dutch..kick off your (B)clogs.....(that one didn't work as well as the 'log' one I'm afraid). Leave messages, ask for stuff, slag me off or tell us we're brilliant.....it's up to you!! The one - the only Tosh Flood putting down some 'Rod' acoustic on the track 'I don't like it but I've gotta do it' during the sessions for the album.

The new album is recorded and is soon to be mastered at the beautiful 'Abbey Road' studios in London. The track-listing has been shifted, moved and dragged all over the minds of Tosh and I but it looks like it will finally lay down peacefully in this shape :

ANSWERS ON A POSTCARD

TO THE WARMTH OF YOU

BE MY FRIEND AWHILE

I DON'T LIKE IT BUT I'VE GOTTA DO IT

HERE WE GO 'ROUND AGAIN

SUCH BEAUTY THROWN AWAY

Dave 'Genius' Gregory (XTC) scored an amazing string arrangement on 'To the warmth of you', Andy Partridge sang (incredibly) and co-wrote the track 'Here we go 'round again', Neil 'Lewis' Hannon plays and sings on 6 tracks and Ben Folds plays piano on the track 'Dear Belinda' which was written by me for a wonderful friend of the bands - actress Belinda Stewart-Wilson. Ben Folds and myself after an ivory tickling session.....

So guys 'n gals I'll see you all shortly for another update with (possibly) a snippet of some new stuff for you to judge and say......"ah..pedestrian really..". In the meantime.....Loredo Tornado - adios amigos!! xx 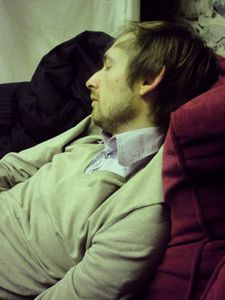